We have left behind very first UKSTAR 2017 which organized by EuroSTAR at London.

There were many QA Specialists, Test Automation Specialists, QA Team Leaders and Developers from different industries.

We had taken a lot of takeaways from workshops, keynotes, conversation tracks and even also coffee breaks.

The purpose of writing this blogpost is to remember my takeaways and share my observations with other people.

I wrote my observations track-by-track. Unfortunately, there were parallel sections on the conference, hence i could only write which tracks that i attended. You know, maybe i needed Hermione’s time turner :) . 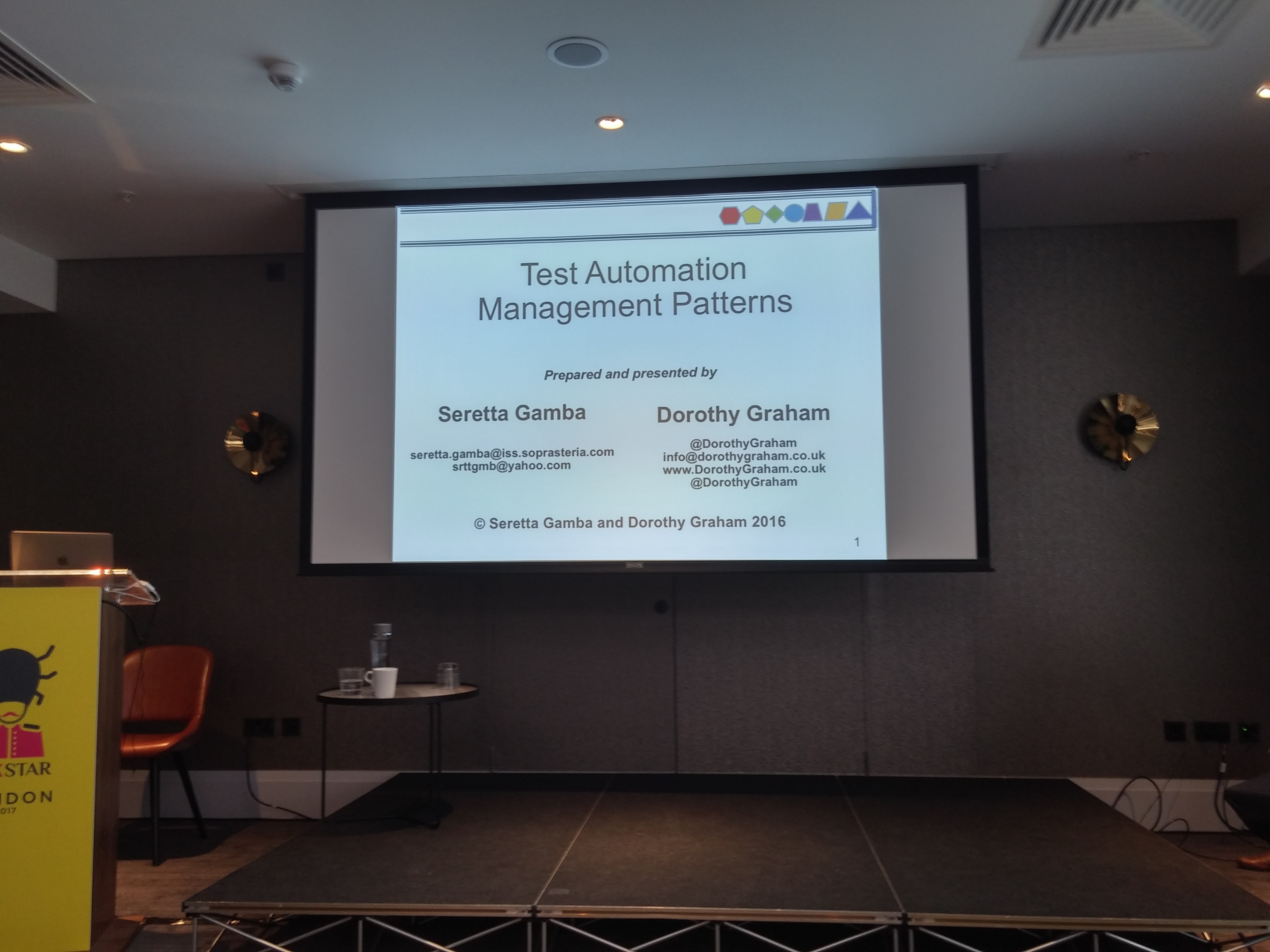 You can get more information from testautomationpatterns.org .

I had read a few things about Mob Testing from Maaret’s blogposts. It was pleasure for me to listen Maaret and Llewellyn. They performed nice presentation to us.

These are my notes from presentation:

I didn’t write about details of Mob Testing. But you can find all details at Mob Programming Guidebook by Maaret Pyhäjärvi and Llewellyn Falco.

Siegfried spoke about open-source Performance Testing Tool : Gatling. He mentioned their story to introduce Gatling. And also, we learned many technical details about the set up, configuration and integration at Gatling.

As a performance testing tool Gatling written in Scala, and their scripts should write in Scala. You can find documents in gatling.io. I am going to give a try to Gatling after that presentation :).

Sigfried had release a project named as Gatling Blueprint Project , i recommend to you have a look it. 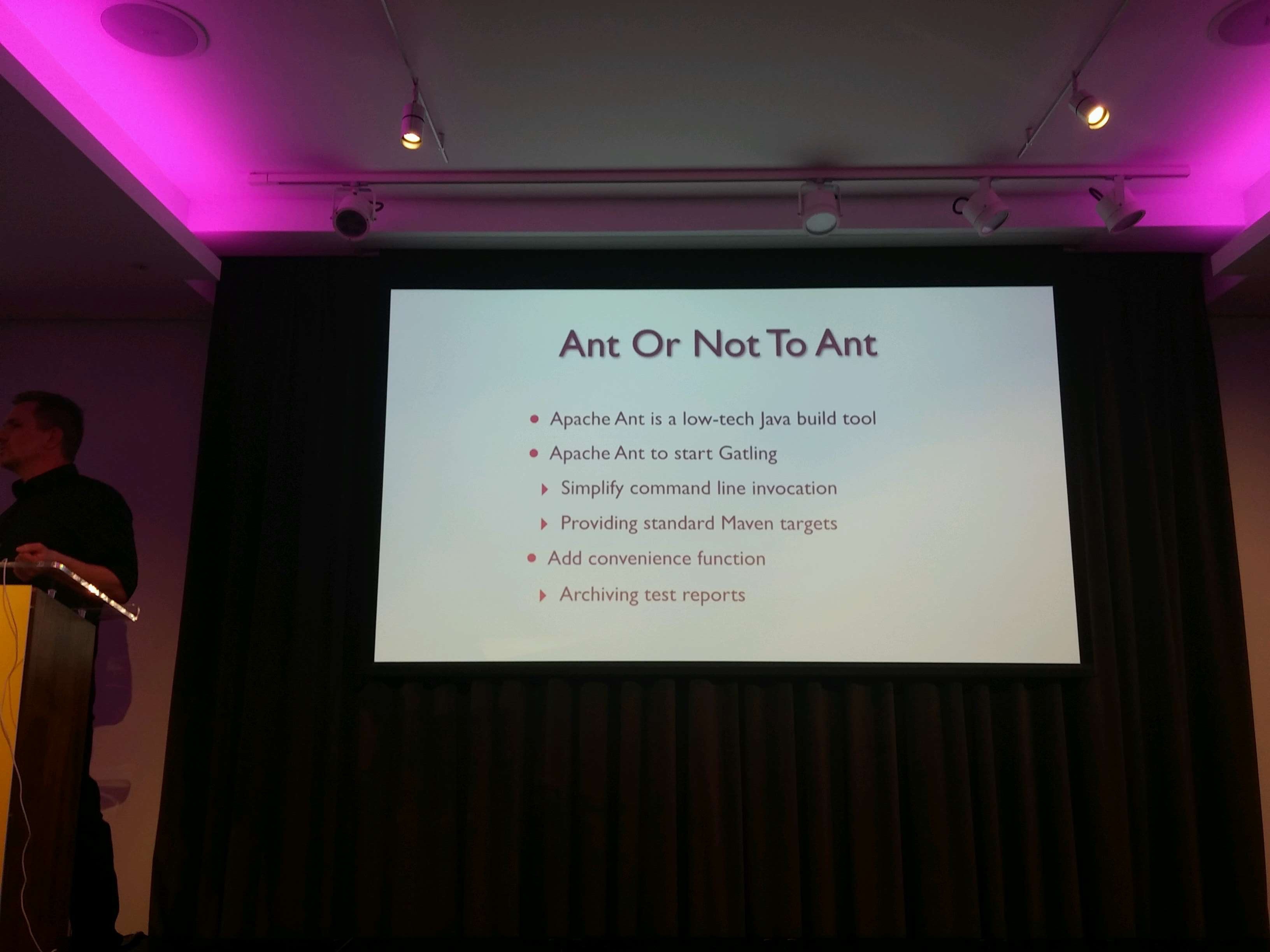 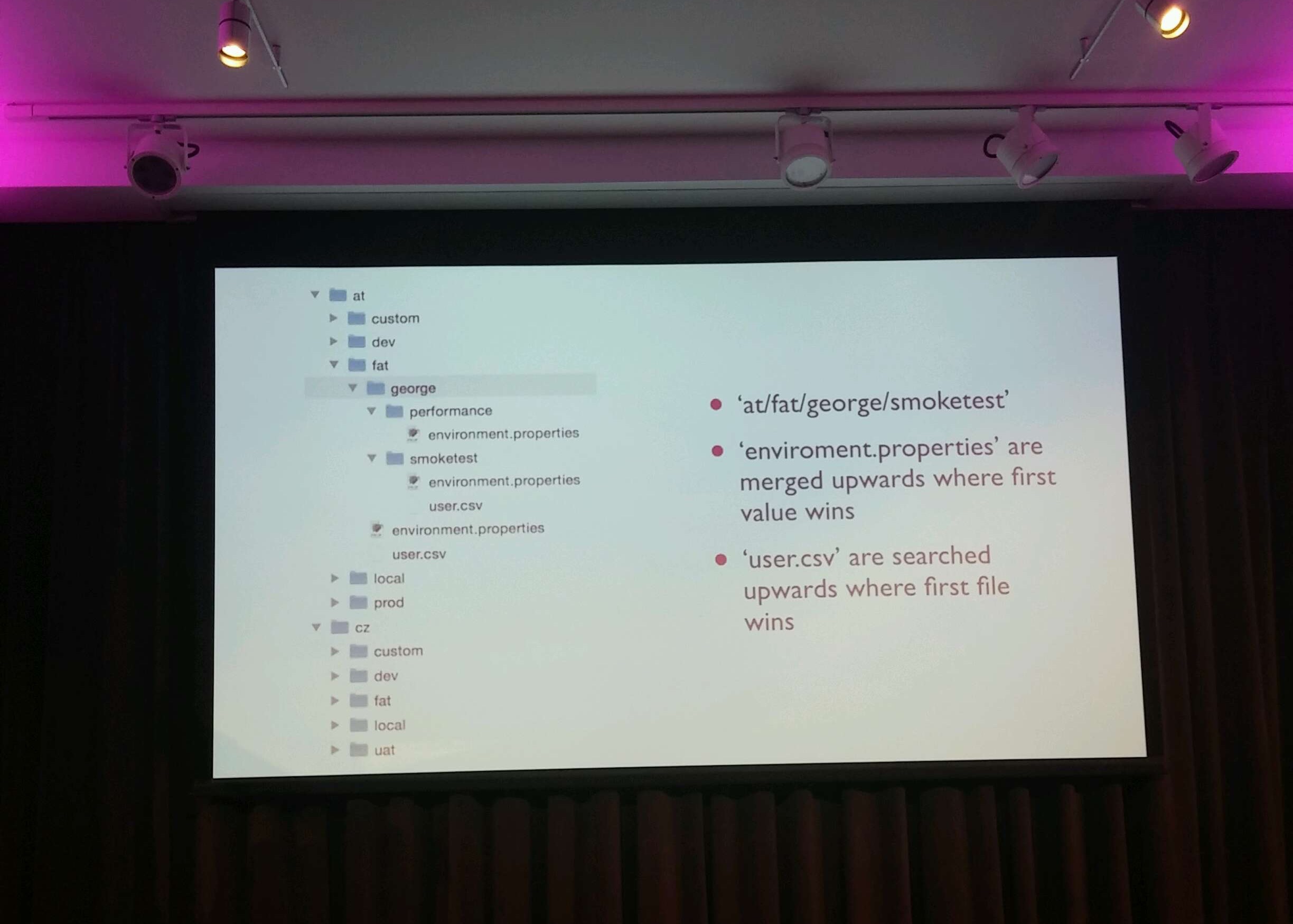 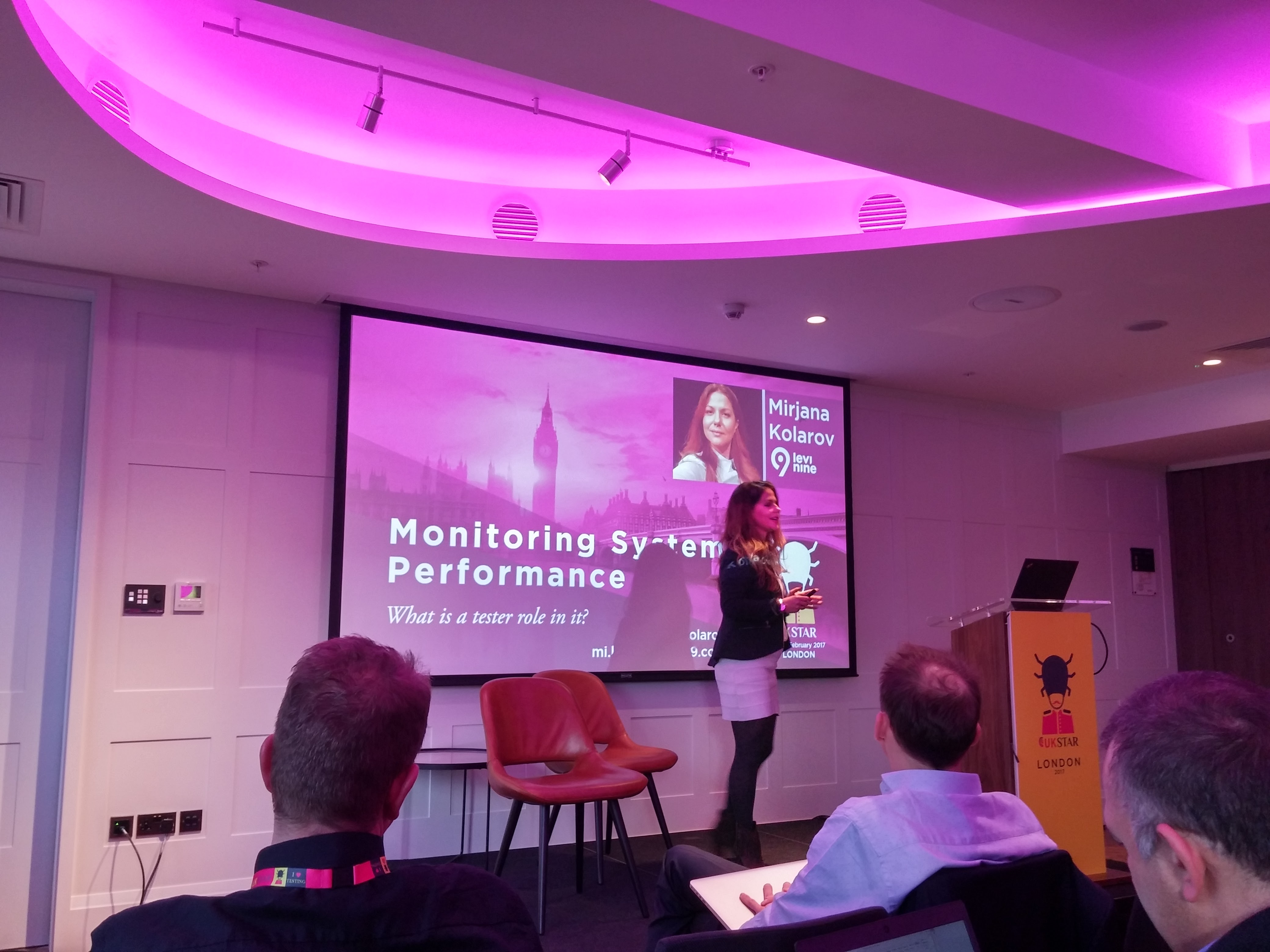 In this section Mirjana told us that how they monitor their system performance and their good and bad experiences. Also we learned how a tester approaches to graphics at monitoring tools in different cases.

Thing have changed after systems move to cloud. Though most of the security issues are resolved, there are still problems at the application layer. Paco told us how can we handle security problems at applications layer. 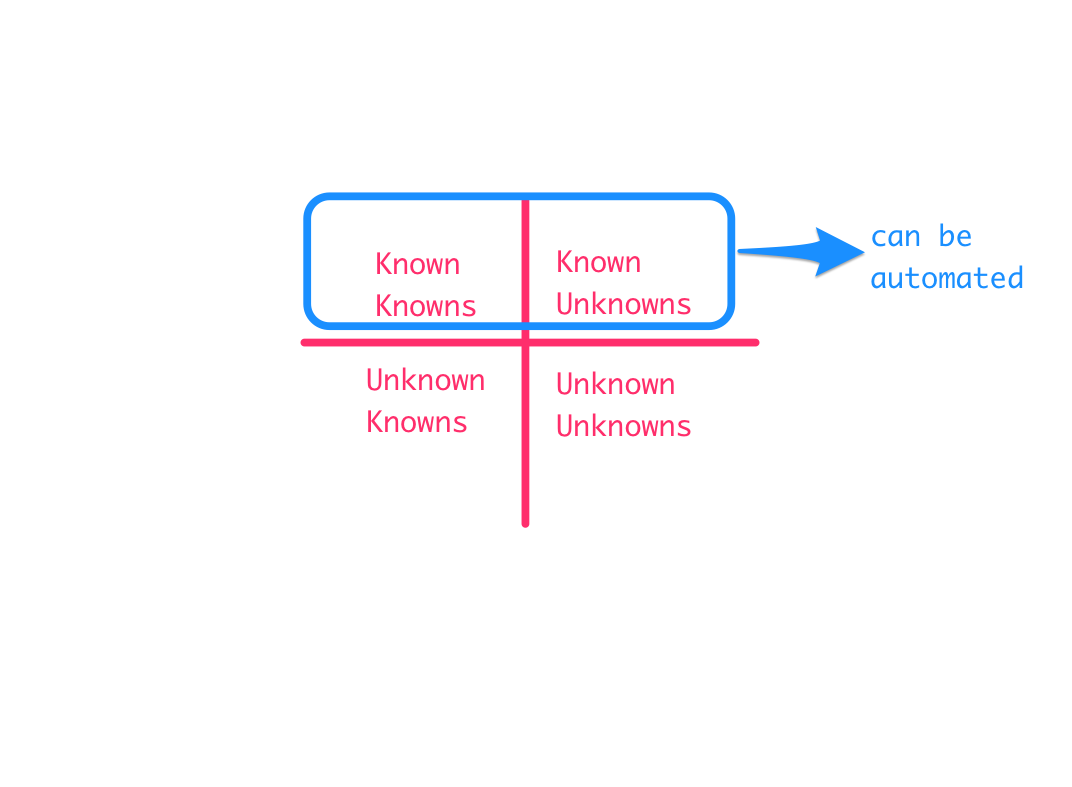 Assure that your software doesn’t have well-known vulnerabilities 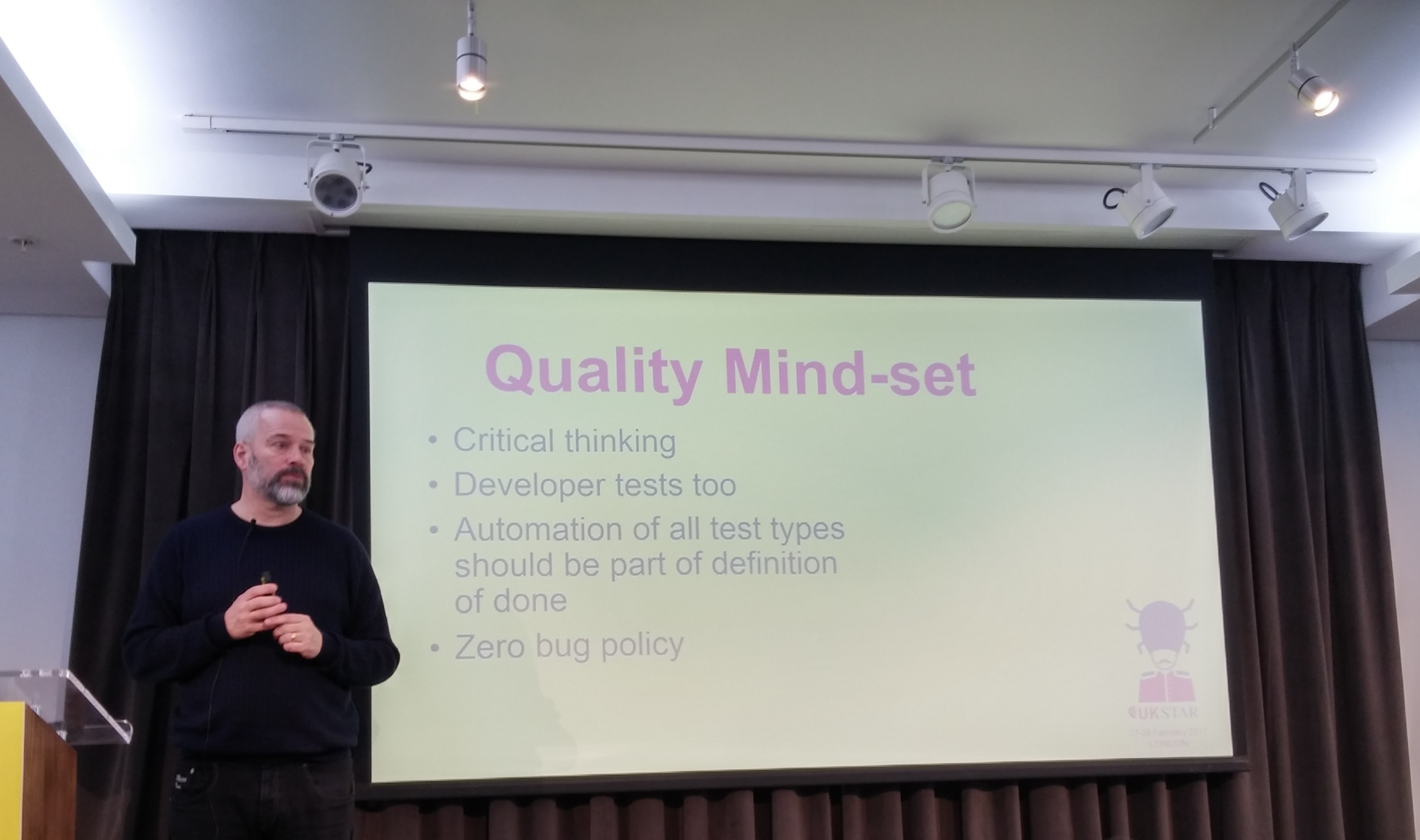 Kristian told us how we get that speed and reliability for fearless teams and fearless development by implication.

So we need these to get fearless:

Ways of working depends on consensus and agreement in your team.

“In learning you will teach, and in teaching you will learn” - Experiences from  the Software Testing Clinic - Dan Ashby & Hannah Mason 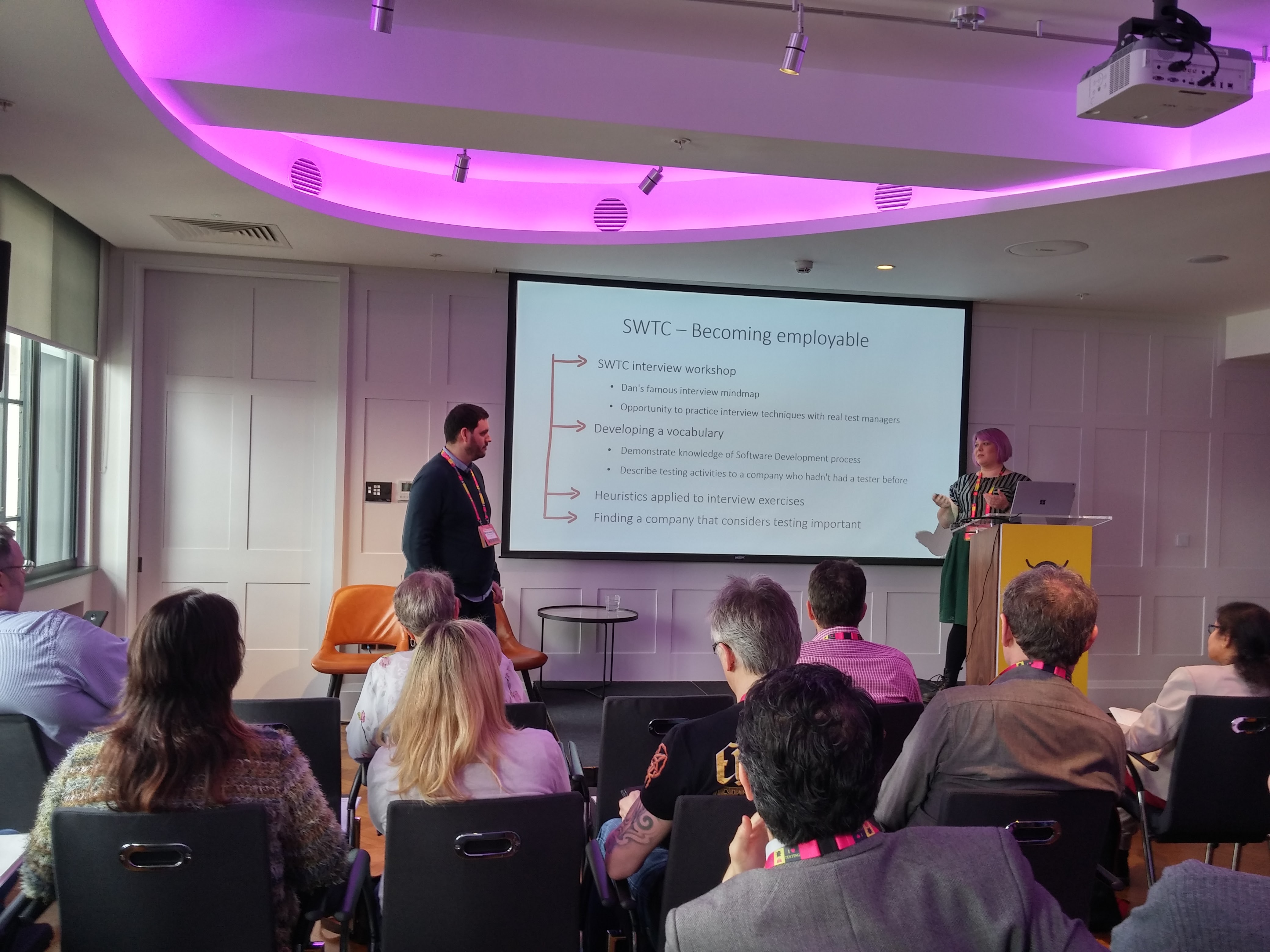 Dan and Hannah told us about software test clinic , how testers can improve themselves. We got that communities play important role in career of the testers.

Also we listened interesting story from Hannah which her transformation nurse to tester. That was a great story. 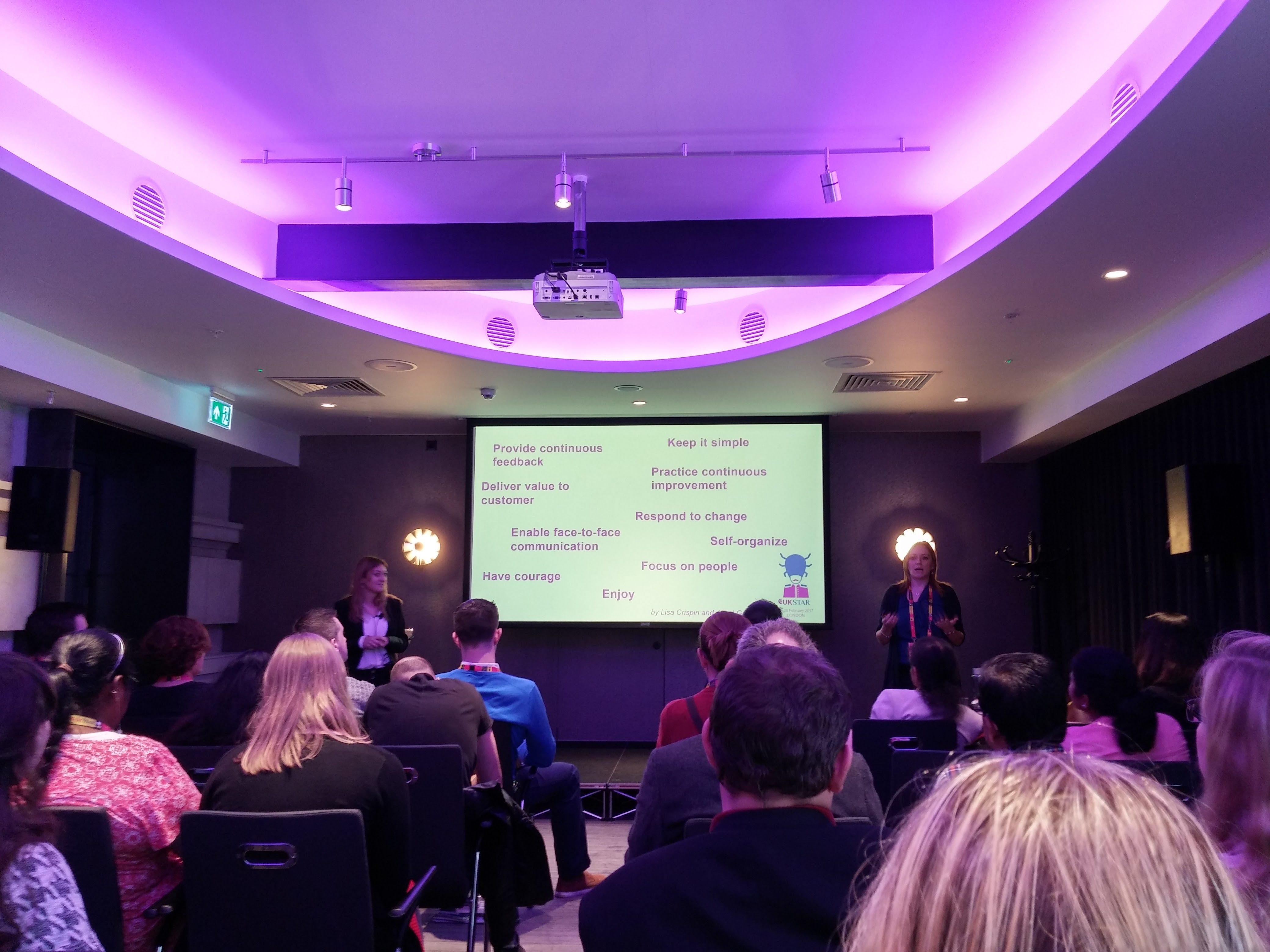 It was pretty enjoyable presentation. That presentation pushed us to think our team dynamics.

We got tips that how we act against to these challenges from Adisa and Amela. These are a few of  them: 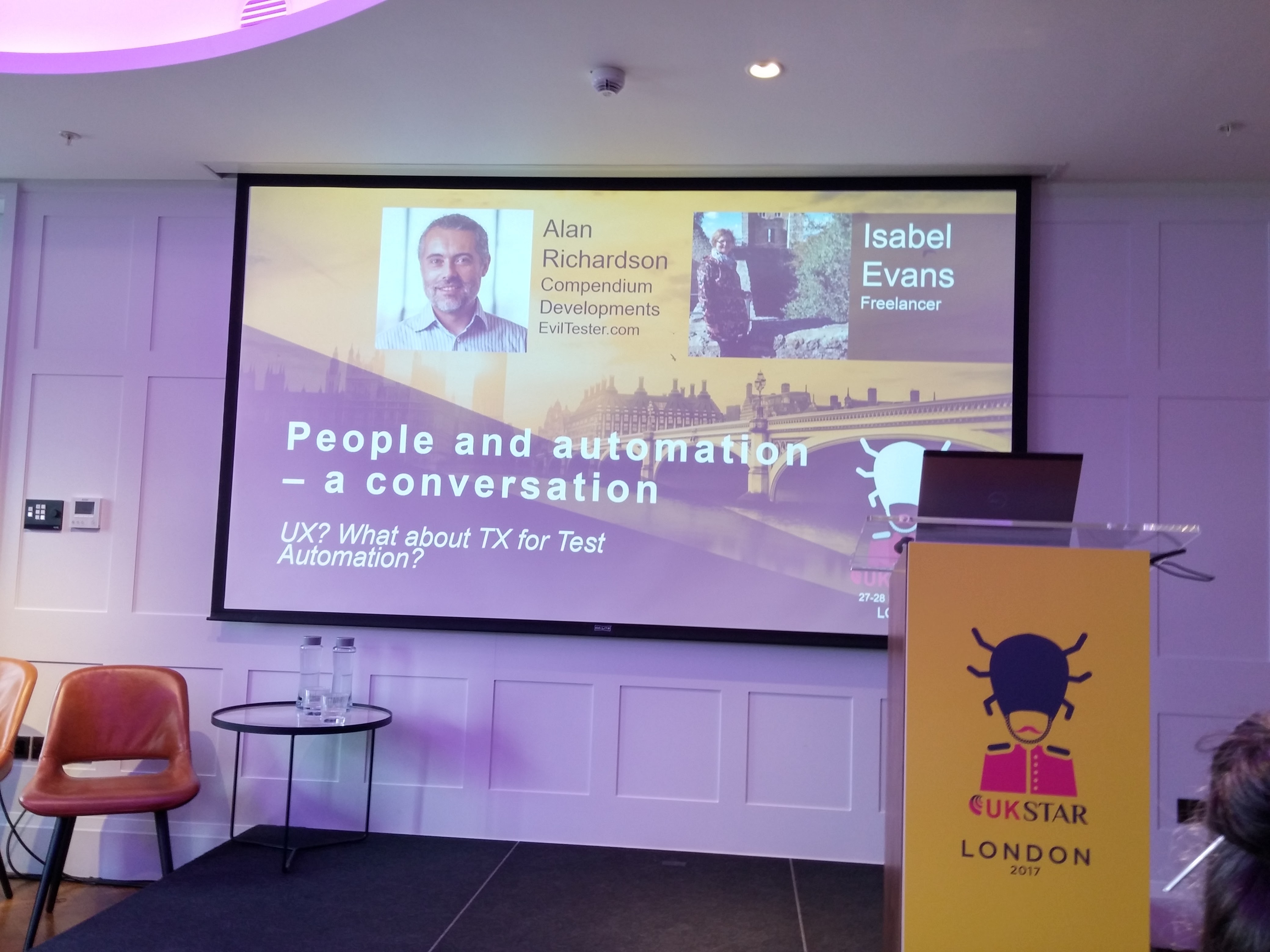 Isabel and Alan handled the trending conversation. So their session was so crowded. Here is a few view from conversation :

He talked about how should we act to improve ourselves and understand quality.

Testing is changing, be the one who adapts.

Everyone is responsible from the quality. 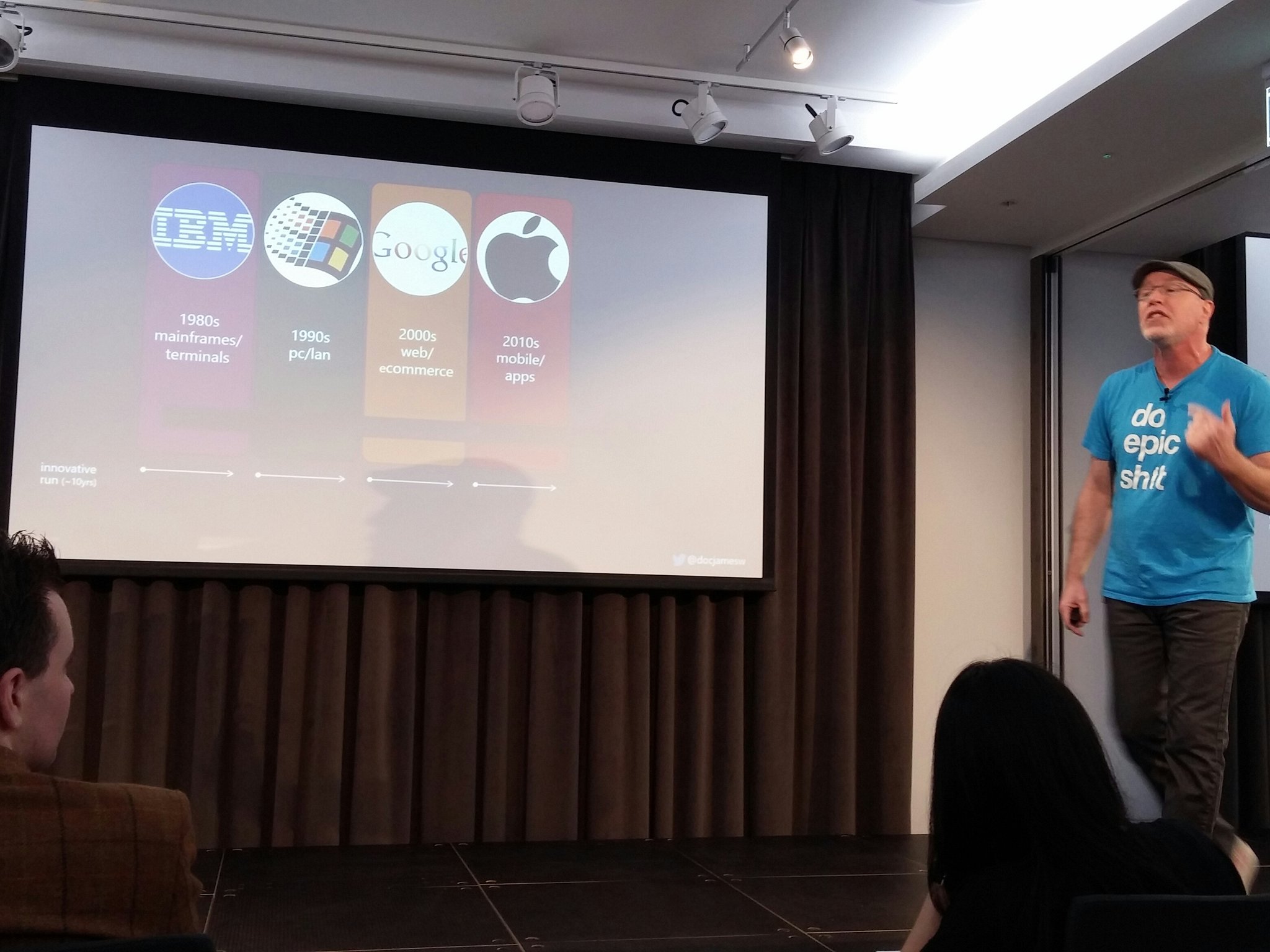 I think it was the most enthusiastic presentation. We got a lot of take aways about testing. James expanded our horizons at the end of the conferences.

He gave inspiration about the future. So that thinking push us to think , how is going to be testing in future.  Part of the technology eras  influenced us in terms of changing. It is look like new era is going to be IoT,  Big Data and VR eras.

If you won’t to predict , you will may be victim of the technology.

It was outstanding conference. We listened great speakers, met great people. Thanks for everyone especially UKSTAR 2017 Team.